MAGNET-SCHULTZ in the first place in the category large companies in Berlin: Secretary of state Gleicke presents the SCHULEWIRTSCHAFT Award 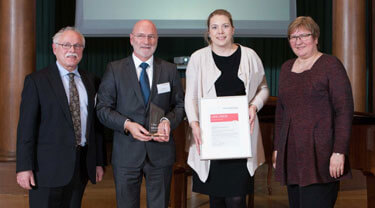 The representative of the federal government for small and medium-sized companies and secretary of state to the Federal Ministry of Economics and Technology, Iris Gleicke, presented the  SCHULEWIRTSCHAFT Award „It has potential!“ to companies, schools and publishing houses on 05.12.2016.

The secretary of state Gleicke: „The SCHULEWIRTSCHAFT network is a catalyst of innovative and at the same time pragmatic ideas for vocational orientation and the digital literacy. Digitalisation of the world of work offers various chances to young people to use their talents and interests. Pupils discover new perspectives for their professional future by practical insights and contacts to companies on site. Cooperation between schools and companies play also an important role as modern teaching media.“

In 2016 Magnet-Schultz applied for the first time and immediately achieved the 1st place in the category large companies (> 1,000 employees). The 2nd place in this competition was achieved by Siemens AG. Dr. Alfred Lumpe (president school SCHULEWIRTSCHAFT DEUTSCHLAND) referred in his laudation to the fact that Magnet-Schultz is characterized by an intensive width of cooperation with pupils and by the high commitment in the work group SCHULEWIRTSCHAFT. Lumpe referred to numerous activities, e.g. internships, support of parent-teacher conferences or technology projects, „So in these workshops and events, unknown talents are discovered and interests are aroused also for technology.“ The laudator emphasized that Magnet-Schultz did not only distinguish with many activities in the scope of job orientation in the company but also with their commitment in schools on site. Mr. Dr. Lumpe emphasised also the special learning culture during the apprenticeship of already employed apprentices and referred to numerous events which also appeal the interdisciplinary education of the youngsters and which were also the subject of the application, as e.g. the trip to the European Parliament in Strasbourg or a common journey to the federal capital Berlin. It concerns also the promotion and further development of political, social and cultural education. Peter Lasser (head of human resources) and Martina Faulhaber (head of education and training) could accept the award for Magnet-Schultz GmbH & Co.KG and on behalf of the entire team education and training in the Federal Ministry of Economy and Technology in Berlin.